LCdr Shaun TOFSRUD - I’ve helped many teenagers become equivalent to Managers and shown them how to be a leader.

With nineteen years’ experience in the Cadet Instructor’s Cadre working in the Cadets and Junior Canadian Rangers (CJCR) Program at the Local, Regional and National Levels, LCdr. Shaun Tofsrud has had the privilege of commanding two of the largest Sea Cadet Corps in the Pacific Region: 201st Sea Cadet Corps (RCSC) GRILSE, with 135 cadets, and 195th RCSC BICKNELL, with 89 cadets, while holding the rank of Lieutenant Commander (LCdr).

He has held every officer position in a Sea Cadet Corps (supply, training, administration, executive officer, and commanding officer) with several Corps in the Pacific Region. In this incredible volunteer interview, LCdr Shaun, CIC officer of the Year, shares some of his favorite memories, accomplishments and motivation. Enjoy.

Congratulations on your well-deserved award. Would you like to tell us the story of how you joined the Cadet Organization as a Volunteer? What motivated you to initially join and what has kept you engaged and involved in the program?

I joined as a Sea Cadet in 1996 with 202 RCSCC Chilcotin in William Lake BC. Believe it or not, I was hesitant and nervous about it. Funny hats, turtlenecks and a gun shirt, Yes sir, Ready Aye ready, it looked intimidating. Just as important, my mother made me join and no one likes listening to their mother at that age. Seven years later I graduated high school, moved to Vernon (for post secondary studies) and aged out as a CPO2 with 63 RCSCC Kalamalka. The CO at the time asked me to stay on as a Civilian Instructor where I got my first taste at being an adult leader where I quickly fell in love with it. Since then, I have worked with several Sea Cadet corps (two as Commanding Officer where I lead one of the largest Corps in BC) and even held a 3-year contract working at Pacific Region Headquarters developing the foundations of their internal computer network (Now known as CCO.Net).


What motivates me and keeps me engaged is working with the Cadets and their Parents. I found that the youth I work with put themselves under all sorts of pressure to be perfect, perfect at School, perfect at work, perfect at home, perfect at cadets, the list goes on. I am there to remind them that cadets is a place to actually relax and it’s okay to make a mistake. The real world won’t be so forgiving.

What are some of your favorite memories and accomplishments while working as a Volunteer with the Navy League or Royal Canadian Sea Cadet program?

As someone who has been with the program for 26 years (19 as an Officer and 7 as a cadet), you get a chance to do all sorts of things and gain all sorts of experience. You meet passionate and amazing colleagues, subordinates, and parents alike. One of my favourite memories was when I was the Commanding Officer of 201 RCSCC GRILSE in Port Moody BC. We had such an outstanding team between the POCOMO Navy League Branch, the officer/adult staff, and the senior cadets. We had amazing communication at all levels, and I honed my “intent-based leadership” strategy to the cadets. Meaning that I trusted them to make their own decisions and gave them the confidence to do what they think is right. That environment I fostered resulted in one of the best training years in my career. Three Cadets chose to attend Royal Military College, one to New York University and I installed a mentorship program to help the junior cadets become senior cadet instructors.

My proudest accomplishment so far has been able to work with so many people in my career and working at the Regional and Local headquarter levels. I have been able to pick up leadership and mentorship skills that I liked from all sorts of people and made them my own. It has enabled me to create a style of leadership that I am proud of.


2022 marked the 127th anniversary of the Navy League of Canada. what advice and recommendations would you provide on how to make the Cadet Programs more attractive to volunteers and how to rebuild the program after the restrictions of the past two years?

When the pandemic hit, it fundamentally changed Sea Cadet program at all levels. I can say that the strong partnership with the Navy League of Canada and the Department of National Defence was key to adapting to that change. Training moved from 100% in person to 100% virtual, then hybrid and back to in person. Officers, Senior Cadets, Navy League Branches and the Regional Cadet Support Units all had to work together to adapt and provide a different kind of training program. As a result, some corps were hit harder then others in terms of cadet population and staff. In the case of my current Corps (195 RCSCC Bicknell), cadets really wanted to be in person and didn’t want to sit in front of the computer for an additional 3 hours even after doing 8 hours of schooling at home.

Now that restrictions are being lifted, the biggest advice I can give Sea Cadet corps is adapt a “Back to basics” policy. Everyone needs to start from the basics and learn what a Sea Cadet is, back to marching, back to seamanship, back to sailing (and everything in between). We need to remind ourselves that our Phase 4 and 5 cadets have had significant time away from being on parade. That is the foundation of the Sea Cadet program. Once the foundation is built, word of mouth will spread among the cadets and their friends outside of the program. Before you know it, you’ll start getting new registrations and growing the population. During your training nights, have a Navy league branch member there to help make new parents feel welcome and invite them to join the branch.

How did you feel winning the Royal Canadian Sea Cadet Officer of the Year, and what advice would you want to share with those who might be on the fence about volunteering for the Cadet programs?

Winning this award was certainly unexpected. This has been the highlight of my time as an Officer within the Sea Cadet program. For those who are looking to join the best group of volunteers, my best advice is to talk with the Commanding Officer and Navy League Branch president of the Corps that you’d like to join. Ask questions and collect as much information as you need to make an informed decision. Once you have that information you should talk about expectations. Clearly state how much or how little you can volunteer. They will be happy to get any help they can.

What is the most interesting thing for you as a Volunteer?

The most interesting thing about volunteering with a Sea Cadet corps is working with so many wonderful people and doing things you cannot do in any other program. I’ve helped many teenagers become the equivalent to Managers and shown them how to be a leader. 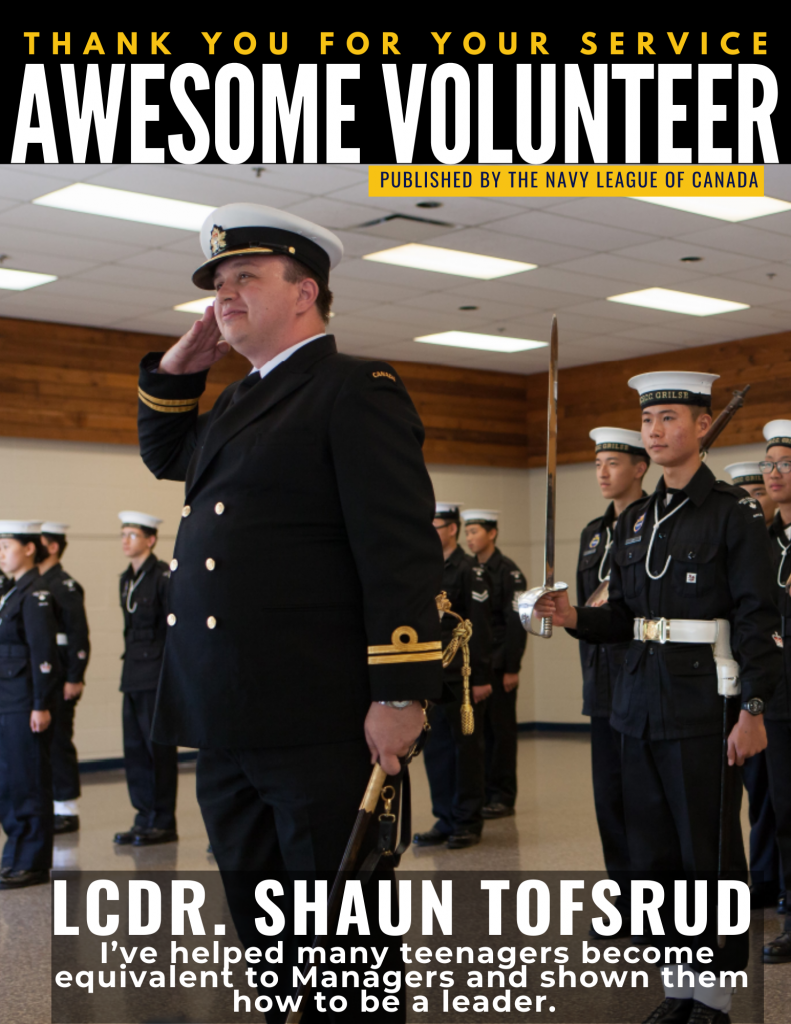 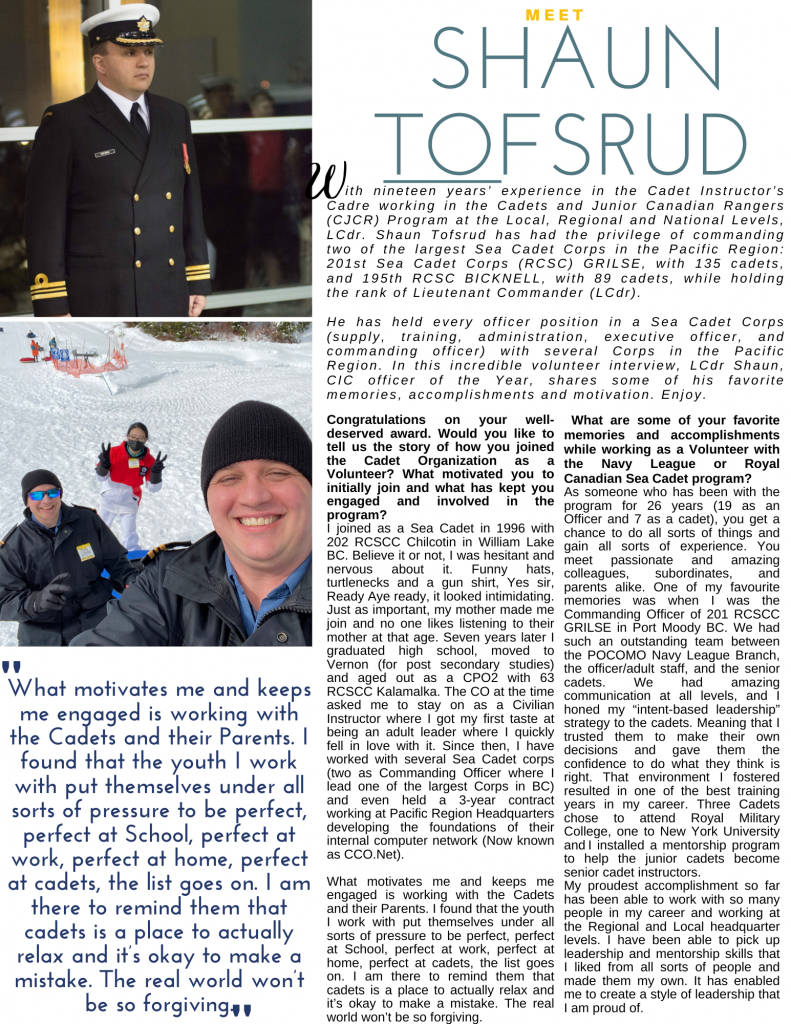