The lives of volunteers like Greg Amy remind us of one thing: dedication and selflessness. For people like him, they have made it their life mission to influence tomorrow’s leaders in a systematic and practical way, as a means of shaping our country’s future.

In this interview, Greg Amy shares fun memories as a cadet 48 years ago and the most interesting impact the program has on him today as a volunteer.


1)    Congratulations on your well-deserved award. Would you like to tell us the story of how you joined the Cadet Organization as a Volunteer? What motivated you to initially join and what has kept you engaged and involved in the program?

I have been involved with the Canadian Cadet program for most of my life. One day in 1974, my mother showed me a newspaper article showing Sea Cadets sailing at Blackstrap Lake. We went down to see the Corps that Tuesday, and the following Tuesday I signed up. Initially I was young, the uniforms, the drill, and the band were very exciting, and there was sailing on the weekends (when the lake wasn’t frozen over). Over the next five years I learned and taught many skills, travelled, and made many good friends who remain so to this day. When the time came, I became a member of the Cadet Instructors List (CIL) and continued to learn and grow. A lot was fun, some not so fun, but I learned from every experience. I left for a while to start a family, but one day my son came home and said a friend of his wanted him to look at this activity called “Navy League Cadets”. I won’t say I kept my previous affiliation a secret, but you should have seen his face when we went down, and people kept coming up and greeting me as if it were homecoming week! The following year, the corps needed instructors, so I enrolled as a Navy League Officer, and have been involved ever since.

2)    What are some of your favorite memories and accomplishments while working as a Volunteer with the Navy League or Royal Canadian Sea Cadet program?

All my children have been involved in Navy League and Sea Cadets, but one of the moments that stand out for me was when I went to a Quadra Alumni function in Aug 2018 where I visited my daughter who worked in the same Boatshed as I had 40 years prior. As she was telling her mother what she did in a day I had many memories I had not thought of in years filling my mind. I was lucky to have been able to participate in a Far East deployment on a Canadian Naval vessel for 4 months in 1979. The experiences both on board and while visiting countries and peoples far different from 1970’s Saskatchewan forever changed how I view people and the world. As far as accomplishments go, I have been fortunate to have been entrusted with command of RCSCC Jervis Bay, HMCS Gimli SCTE, and NLCC HM Weir. I will tell you I learned something significant each time. My current role as a Navy League Cadet Chairperson in Saskatchewan Division embodies a lot of that service, and the work of helping CO’s keep their units running, especially in the last two years stands out as an accomplishment.

3)     2022 marked the 127th anniversary of the Navy League of Canada. What advice and recommendations would you provide on how to make the Cadet Programs more attractive to volunteers and how to rebuild the program after the restrictions of the past two years?

Its OK to be seen as having fun with what you do. Cadets is fun. Especially at the Navy League level. If its not fun, you are doing something wrong. I was fortunate to have a CO when I came to Navy League Cadets who understood that. One of my big take-aways. Understand that what you are doing is fundamentally good. We are building stronger people, and its not just the cadets. Be a group of people who like to be around each other and make some time to socialize outside of parade nights. Its great to volunteer, but its OK for it to be a little about you as well.

4)    How did you feel winning the 2021 Navy League Member of the Year and what advice would you want to share with those who might be on the fence about volunteering for the Cadet programs?

I will share with you that when I got the call that I had been named for this honor I think my response was that “I don’t know what I have done to deserve this award”. I mean, I don’t think I did anything special. I have many years of experience upon which I rely and try to share. I have goals I like to achieve, and work to do so, and work with the people to support them and help them succeed. It works for both parties. They are my friends; we work to a common goal. And when you go to all the ACRs and see the progress that these young people have made in the previous ten months, that makes me feel good.


5)    What is the most interesting thing for you as a Volunteer?

I think that it is everything that I would never have been exposed to, been called upon to try had I not volunteered. There are so many things, too many to mention that left to my own devices I would not have considered to ever do or try. Sailing. So many conversations with people far different from me that I would never have had. While I may have paid my way with a little work, it has broadened my horizons. So for me, that has made all the difference 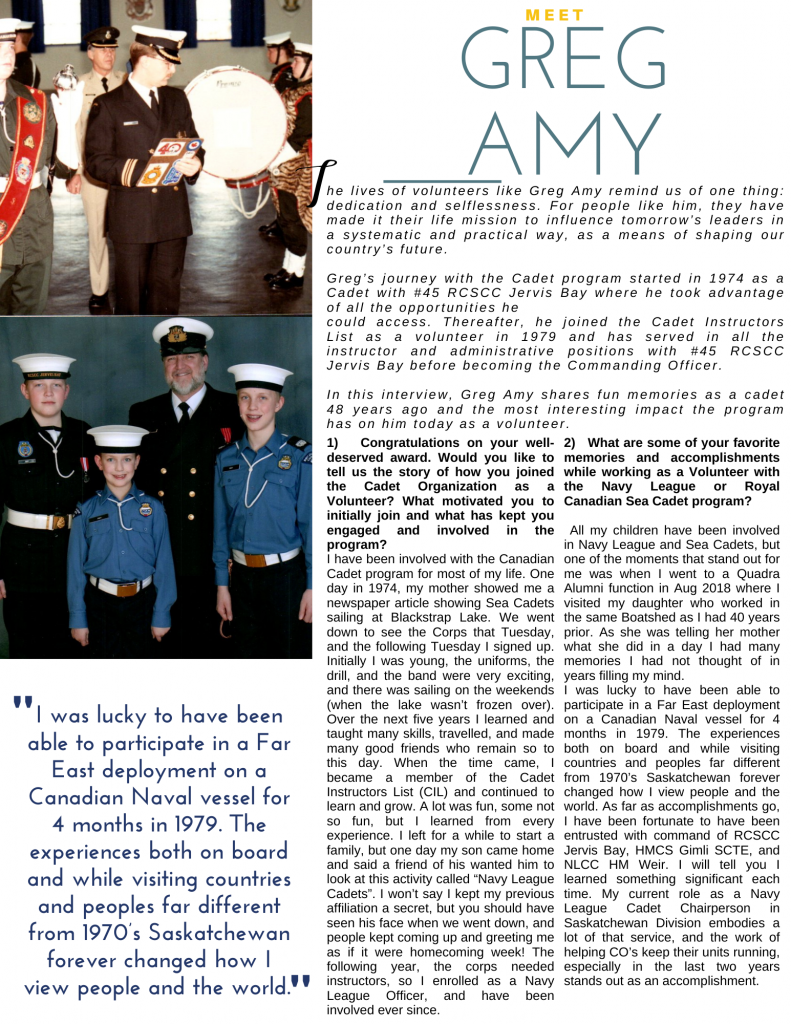