On Saturday, January 15th, 2022, the Royal Canadian Navy recognized four young people for their outstanding leadership and contributions to the Navy League Cadet and Royal Canadian Sea Cadet Programs. The recipients included, Eljoe Miron, Lilianna Borean, Theodore Lautsch and Drew Briand as exceptional leaders, who made a real difference in their Cadet Corps. The Cadets’ Parents, Family and Friends, the Commander and the Chief Warrant Officer of the Cadets and Junior Canadian Rangers and members of the Navy League of Canada National Board of Director participated in this virtual presentation to honour and celebrate each of them.

Opening the event, Brenda Pinto, National President of the Navy League of Canada and BGen Jamie Speiser-Blanchet, Commander, Cadets & Junior Canadian Rangers (CJCR) commended the winners for their exceptional performances and contributions to the Canadian Cadet Organization. They recognized the winners’ active, motivating participation in community-based activities in the Cadet Program and encouraged them to continue to contribute to their communities in meaningful ways.

The Navy League of Canada also welcomed, VAdm Craig Baines, Commander, Royal Canadian Navy (RCN)  and CPO1 David Steeves,  the Command Chief Petty Officer of the Royal Canadian Navy to make the official presentation to the 2019 and 2020 National Cadets of the Year. VAdm Baines remarked, “We need more young people like you all in Canada. You represent the best of us. Thank you so much for what you have done”, referring to Theodore and Drew. Adding to this, shortly after presenting the 2019 and 2020 Navy League Cadet of the Year Award to Eljoe and Lilliana, CPO1 David Steeves, Command Chief of the RCN concluded his speech with  “No matter what you do in the future, I know it’s going to be awesome.”

The Royal Canadian Navy Leadership Award remains one of the prestigious annual recognition bestowed to the Navy League Cadets and Royal Canadian Sea Cadets who have excelled in leadership, demonstrated superb seamanship knowledge and skills and making other cadets better in all aspects of their training.

Theodore Lautsch, a Navy League Cadet from NLCC Praire Schooner Cadet (2011 -2013) and  RCSCC Drylander Cadet received the Royal Canadian Sea Cadet of the Year 2019 for his outstanding performance as a Sea Cadet. Prior to this award, Theodore Lautsch was the recipient of a Special Navy League Scholarship of $1,500 to help with education costs. In addition to the leadership award, Theodore has been recognized for outstanding academic and sports achievement with the Lord Strathcona Award, as well  the Royal Canadian Legion Medal of Excellence for community and leadership, and the ANAVETS (Army, Navy and Air Force Veterans) Medal for achievement as the Top Sea Cadet at a Cadet Training Centre..

Violin and tenor saxophone expert Eljoe Miron was awarded the Navy League Cadet of the Year 2019. Hee served as a Navy League Cadet for three years (2016-2019) with NLCC Admiral Rayner, and participated in band, drill team, and marksmanship teams. Before this award, he was also the recipient of the Navy League Medal of Excellence.

For Liliana Borean, joining the Cadet program was a family tradition. Most of her family members, cousins, and even her Grandpa were active members of the Cadet organization. Liliana Borean did not only keep the tradition alive by joining the Navy League Cadets but had gone ahead to make everyone proud by winning the Navy League Cadet of the Year 2020.  She served as a Navy League Cadet from 2017-2020 with NLCC A.N. MORRIS and participated in several community activities such as Christmas Parades, Remembrance Day Services and Parades, and many more volunteering activities.

St. Mary’s University Bachelor of Science undergraduate student, Drew Briand was honored with the Royal Canadian Sea Cadet of the Year 2020. Drew served as a NL Cadet with NLCC Micmac and RCSCC Sackville (2014-2020). His Staff Cadet Experience at HMCS Acadia (2018 & 2019) included: Sailing Levels (1-4), Qualified Sea Rescue Boat (RHIB),  First Aid with CPR, and AED accreditation. With Canada Sail and Expert Marksmanship Qualification to his credit, Drew had previously been honored with several medals which include; the Navy League Medal of Excellence, the Royal Canadian Legion Medal of Excellence, and the Sea Cadet Service Medal. 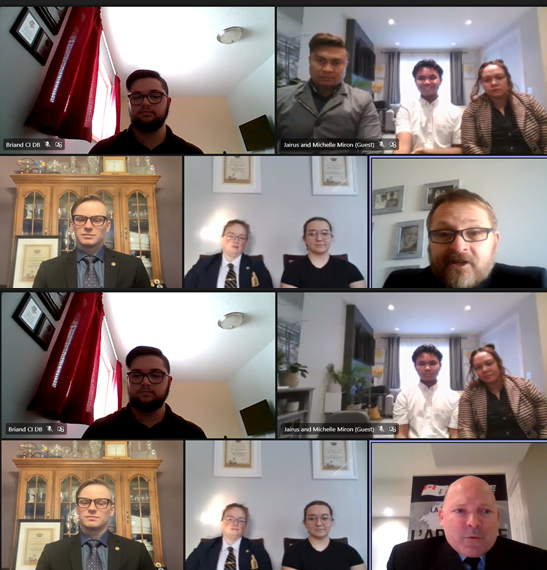