LCdr Beverly Mackillop, CD transferred to Royal Canadian Sea Cadets at the age of 15, after enrolling with the Navy League Wrenette Corps Bytown in Ottawa, ON in 1974. Bev would transfer to RCSCC Falkland in 1975. The significance of 1975 cannot be understated. It was only then, when female cadets could join the Royal Canadian Sea Cadets. After joining, Bev’s two younger sisters Maureen and Mary joined to follow in their father’s LCdr John Mackillop footsteps, assuming leadership roles with the Cadet Corps – Sea Cadets quickly became part of their family.

The decision to join Sea Cadets has lead Bev on a journey of teaching, leadership, mentoring, and service to her community which continues into present day. Bev quickly immersed herself in the Music Program at RCSCC Falkland, assuming senior appointments within the Falkland Band, culminating as the Director of Music of the Falkland Band at 17 years old. Bev received her gold insignia from the Duke of Edinburgh in Calgary, AB in 1979.

During this period, she also enrolled in the Cadet Instructors List (today’s COATS-CIC) and completed Basic officer Qualification Training and the Officer Cadet Course in HMCS Quadra in 1979. Beginning in 1979, Bev would annually be employed at HMCS Quadra returning every summer, with the exception of 1984 and 1985, until 1987. During the summers of 1982-1983 and 1986-1987, Bev was appointed as the Director of Music for the Quadra School of Music. Her service to Sea Cadets continued at RCSCC Falkland culminating with her appointment as Commanding Officer from 1993-1996.

While in Ottawa, she continued to develop young musicians both in and out of Sea Cadets, working as a high school teacher with the Ottawa Catholic School Board (OCSB). Bev’s career with the OCSB included appointments as Department Head, School Board Consultant and Vice Principal. In the latter part of her educational career, she worked with adults returning to high school to complete their education as the Vice Principal of St. Nicholas Adult High School. Throughout her career, she always maintained a high standard of professionalism, and a focus on the importance of education. Bev retired from the OCSB in 2015.

Bev assumed the role of Executive Director at the Youville Centre in 2015. The Youville Centre is an Accredited Child and Youth Mental Health Agency, working with young mothers and their children. The Youville Centre’s focus is supporting the young moms’ children in the Child Development Program, while the moms receive mental health day treatment as they work towards the completion of their high school diploma.

Bev is currently volunteering with the Navy League of Canada, Ottawa Branch with the 100th Anniversary of RCSCC Falkland. As a result of Bev’s leadership and “service before self”, she has contributed to the positive development of many young women within the Royal Canadian Sea Cadet Program, and those within her community continually demonstrating positive core values while helping them achieve success. 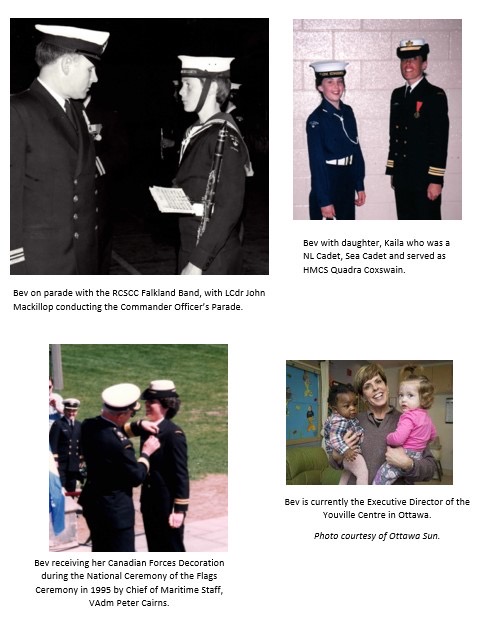