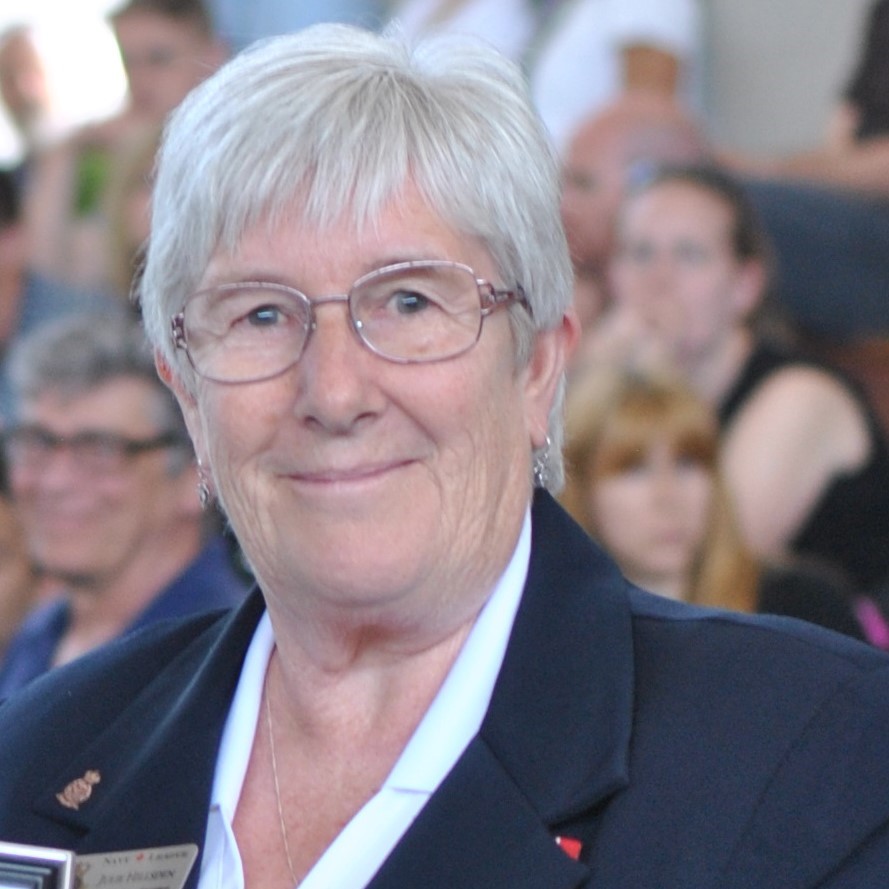 In 1985, Julie’s eldest son joined NLCC Adm. Rayner and Julie joined too – as a volunteer with the Corps and a member of Victoria Branch.

In due time both Hillsden boys aged out of NL Cadets and became Sea Cadets in RCSCC Rainbow. Julie was the Branch Vice President at the time but was persuaded to become a Civilian Instructor with Rainbow and in 1991 enrolled in the Canadian Armed Forces, Cadet Instructor Cadre.

For the next ten years, Julie served at RCSCC Rainbow in all positions up to and including a term as Commanding Officer. In 2000 she left her nursing career and accepted full time Class B employment at RCSU(P) where she served first as Special Projects (Sea) and then as Staffing Officer and budget manager for HMCS Quadra – while still volunteering at RCSCC Rainbow.

Julie was part of the Working Group that wrote the original Small Craft Operator Program and was responsible for much of the planning, logistics and execution of the Annual Seamanship Concentration welcoming Sea Cadets from all regions of Canada for week-long deployments aboard Naval vessels – first the YAGs and then the Orca class PCTs – as well as the tallships ‘Maple Leaf’, ‘Robertson’ and ‘Pacific Swift’.

Julie spent 4 Summers at Albert Head Air Cadet Summer Training Centre as the Public Affairs Officer and 11 Summers at HMCS Quadra as Food Services Officer, Movements Officer and the final 3 years as Chief Administration Officer with the rank of LCdr.

In Dec 2011, Julie retired from the CAF but before she could settle into retirement, her eldest son Paul, who was now the President of the Victoria Branch, talked her into becoming the Branch Secretary. In 2017 Julie became Vice-President, Sea Cadets, Vancouver Island Division and is now in the third year of her term as President.

In 2021, Julie was awarded Life Membership in the Navy League of Canada.

Julie is - and has always been – passionate about these two wonderful Cadet Programs that the Navy League of Canada supports, (her proudest moment was being on Parade at HMCS Quadra in her final year with her Grandson on Parade as a TWGT Cadet during his first summer at Quadra) but worries about the future of the Sea Cadet program as some of the distinctly elemental aspects seem to be getting eroded.

Julie lives in Victoria with her husband Ron and their two Scottish Terriers.